Posted on November 1, 2017 by alundarwood

While the methodology behind VaR has been around for several years arguably the most notable advancement of VaR was by J.P. Morgan in the early 1990’s. J.P. Morgan CEO Dennis Weatherstone famously called for a “4:15 report” that combined all firm risk on one page, available within 15 minutes of the market close, this led to the creation of their RiskMetrics system and global recognition of the VaR methodology.

There are generally three accepted approaches to measuring VaR:

Statpro Revolution** uses the Historical simulation methodology because of its ability to accommodate all asset classes as well as their derivatives and the methodology is intuitive.

Based on a simple equity portfolio.

Before generating the VaR, we select the Confidence Level, Holding Period and History. 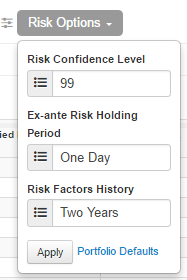 The Confidence Level is used to specify the applicable loss, if 500 returns were observed, a Confidence Level of 99% would imply the 495th worst return, based on today’s market value, would represent the VaR.

The Holding Period specifies the return interval, One Day would imply the return over one day.

Some things to remember:

Below is the histogram of the observations (daily over two years, approximately 500 observations):

From the above the distribution is clearly not normal as per the assumption of the variance-covariance methodology.

The Portfolio Risk is displayed on the top, indicating that the Portfolio could lose 2.65% of its market value at the 99% Confidence Level over One Day. 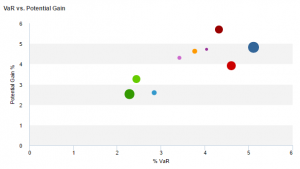 On the left is an ex-ante VaR versus Potential Gain graph at sector level, this can be equated to the ex-post Risk versus Return graph. In the classic sense, we require the highest potential return for the least risk. 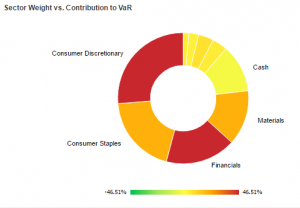 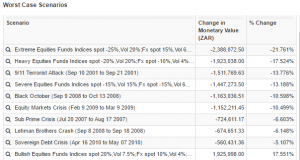 On the left are various stress tests performed on the Portfolio over historic periods or simulated conditions. Unlike VaR these represent the Worst Case Scenarios over the historic period.

On the left are the Top Risk Contributors, these are the biggest contributors to the Portfolio VaR.

As is to be expected to get accurate VaR outputs the individual securities must be correctly loaded, for example options must be loaded with the correct option characteristics (e.g. American/European, call/put, strike, expiry date) to generate a synthetic history for VaR purposes.

Although VaR has achieved global recognition it still has its’ limitations and critics, for example:

Being cognisant of the above means we should not place an inordinate degree of faith in VaR as if it were a magic number that tells all about a Portfolio’s risk, but rather use VaR as one of many tools in a risk professional’s arsenal to manage and hence mitigate risk.

** The example above was performed in Statpro Revolution and I am grateful for the assistance they provided.

For more information please use the links below:

I am involved in market risk and performance analytics in the financial services industry. My expertise includes portfolio management, fixed income analysis, advanced derivative pricing and building software valuation models.
View all posts by alundarwood →
This entry was posted in Risk management. Bookmark the permalink.